It's Moral Monday in Raleigh, NC

Celebrate the 5th Anniversary of the launch of the Moral Monday Movement, with a get out the vote rally. Let's take this Resistance to the Ballot Box.

Did you know the Moral Monday movement is five years old?

From Rev. Dr. Spearman: "Five years ago, on April 29, 2013, we made national history when 17 North Carolinians united to fight the regressive policies of the North Carolina General Assembly that eroded our beloved state and her most vulnerable people. Their courage ignited a movement. Week after week people continued their protest. By the end of the summer, the Forward Together Moral Movement had 1000 North Carolinians arrested for nonviolent direct action to preserve the democracy of our state.'

Tonight come out to celebrate and honor the Moral Monday Movement with a special Moral Monday Get Out the Vote Commemoration at 5:30 at the Halifax Mall, (behind the NC General Assembly.) 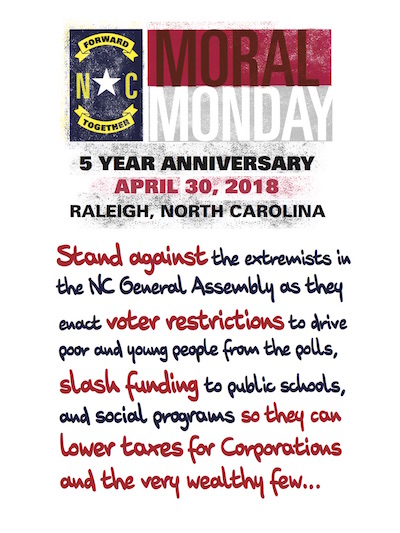 See more art and designs inspired by the moral movement